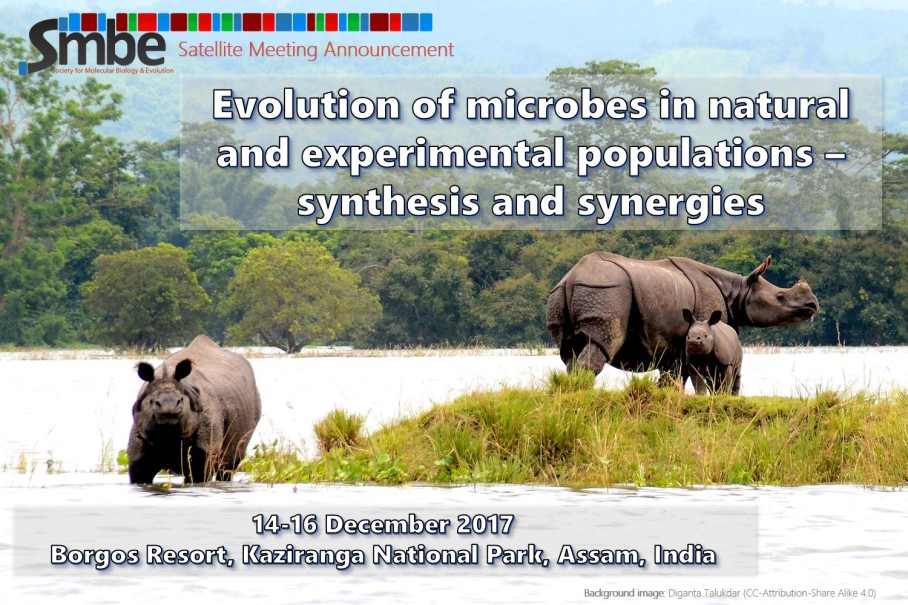 Remit: Evolutionary research on microbes tends to adopt either one of two strategies; experimental evolution (EE) in the laboratory or studying variation within natural populations. Microbes are highly amenable to experimental evolution, and this approach has successfully addressed a broad range of questions, including adaptive dynamics, the repeatability of evolution, social interactions, and the distribution of fitness effects.  Whole-genome sequencing of large samples from wild populations are similarly underpinning rapid advances in understanding how genome dynamics (such as the role of horizontal gene transfer and the pan-genome) underpin adaptation and ecological interactions. These two perspectives should, in principal, provide mutual reinforcement, as each addresses the potential weaknesses of the other; EE studies offer a controlled but artificial environment, whereas studies on natural populations are inherently more complex yet more realistic. This meeting successfully bridged the gap between these approaches and build upon synergies and reciprocal benefits.

Additional sponsorship: In recognition of the importance of standardised and accessibility bioinformatics platforms for interpreting whole genome sequences in both experimental and natural bacterial populations, a special 2 hour session was held on pipelines and bioinformatics, with a focus on the use of the UK cloud –based informatics system “CLIMB” (www.climb.ac.uk). Professor Sheppard, who was on the organising committee of this meeting, is a PI on the CLIMB consortium, and this session was funded using an additional £5,000 from the CLIMB budget.

Each attendee received a certificate of attendance, a conference bag, note paper, name badge and a small souvenir.

PhD / post doc awards: Following the suggestion from the SMBE, we ran an open competition for support for early career researchers (PhDs / Post Docs). We invited applicants to submit an abstract of their work, and if chosen we would provide lodging, local transport, and 1000USD contribution to airfare (or 300USD if travelling from inside India). The awards were advertised widely via social media. We received 24 excellent applications, from which the organising committee chosen 10 by way of voting. Of the awardees, 5 were male, 5 were female, 2 were from India.

Local travel: All attendees were met at the airport (Guwahati) by the local organisers and were provided with a taxi either straight to the resort, or to Tezpur University for the night before the conference where they were provided with accommodation in the guest house, with dinner and breakfast.

Venue: The Borgos Resort was a spectacular setting in the middle of Kaziranga national park. The rooms, meals and conference facilities were fantastic, as were the resort staff (see feedback comments). Wifi was present but worked intermittently.

Scientific sessions: The schedule is attached. Counting the CLIMB session, there were 28 presentations, including nine from Indian delegates. The presentations successfully combined studies on natural populations and experimental studies, and were split in 6 sessions over 2.5 days. All sessions were followed by lively panel discussions on the main themes addressed.

Social activities: A pre-conference cricket match was arranged at the University of Tezpur. The teams were India vs the rest of the world (India won easily).  All attendees were invited for an early morning elephant safari to see rhinos and (in one case) a tiger. All attendees took this opportunity which proved universally popular. There was a cultural program of dance and music and a gala dinner on the final evening.

Budget: See budget breakdown attached. The 40,000USD (plus additional 5000GBP from CLIMB) was sufficient to cover all costs, including local transport, accommodation and lodging, social program (including the safari) and contribution to flights (1000USD from overseas, 300USD for Indians). There was 300GBP overspend which was picked up by Prof Feil from other funding.

Feedback: We requested all attendees fill in a short feedback form. All the feedback we received is attached, and this is universally positive. Comments include:

In sum: This meeting was, by any criteria, an outstanding success. The generous budget provided by the SMBE was sufficient to provide a fantastic venue and board, overseas and local travel, and an active and important social program. The meeting succeeded in its primary goal of bringing together experimental evolution with studies of natural population, but it also brought many researchers together and kick-started a number of new collaborations. The travel award scheme for young researchers was an excellent suggestion by the SMBE and provided a great opportunity for those awarded the funds, who added a vital element to the meeting. Finally, I am told that this was the first SMBE funded meeting in India. If this is true, this provided a critical step in extending the remit of the SMBE and in providing Indian scientists the global platform their excellent research deserves.